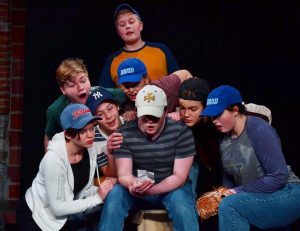 Three RPA humanities instructors, Hallie Caron, Hector West and George Hegarty are serving as the playwrights for this year’s performances. The instructors will also workshop the plays with students by taking their unfinished scripts, rehearsing them and changing them with the help of actors and directors.

The short plays are part of RPA’s January term classes and serve as the theatre option for students. Over 30 students will participate as actors and directors for the evening show.

The plays are free and open to the public, beginning at 7 p.m. in RPA’s McClay Center for the Performing Arts at 640 SW Evergreen Ave in Redmond.

Redmond Proficiency Academy Theatre is recognized for its ability to perform productions from the hilarious to provocative, competing regularly in regional, state and national theatre competitions. Their success on stage has garnered the program national awards at the International Thespian Festival for the past four years.

More than 200 of RPA’s 900 middle and high school students participate in the theatre program as actors, directors, writers, lighting and sound techs, makeup artists and stagehands.