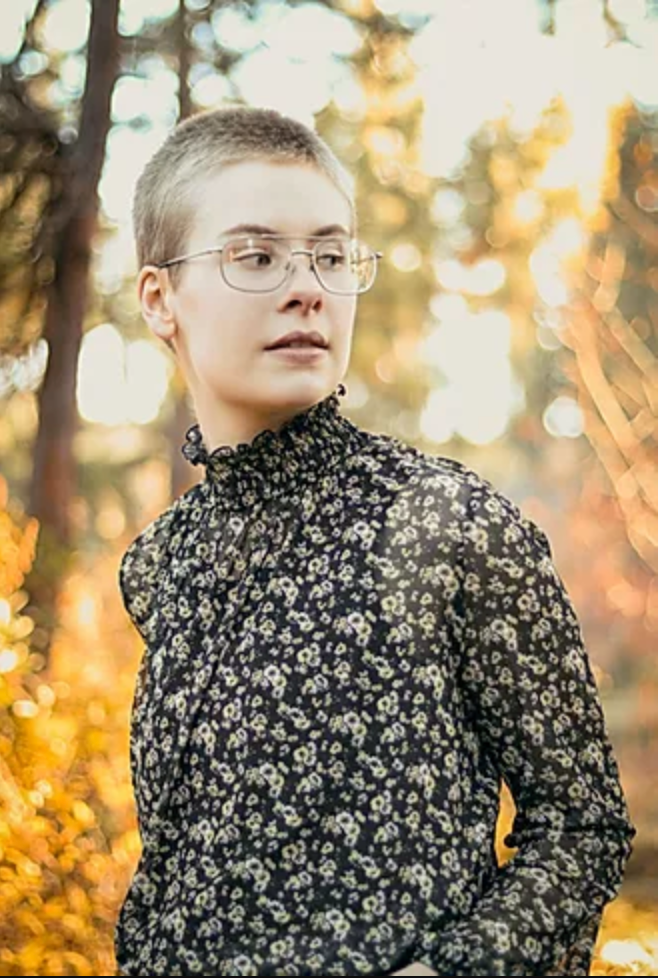 Al Lehto is the recipient of the inaugural student writing prize from the Waterston Desert Writing Prize competition. The winning piece, titled “The Badlands,” reflects Lehto’s passion for storytelling and experiences in the high desert of Central Oregon.

Lehto (preferred pronouns: they, their, them) is a graduating senior from Redmond Proficiency Academy and will be attending the University of Oregon in the fall to study early education. Lehto chose to study early education, hopefully teaching in the humanities and literature department, because of the mentors they had in high school.

“I had wonderful mentors from RPA and they inspired me to be a mentor and were helpful in assisting me in taking the leap,” Lehto said.

Lehto has had many life experiences that led to to find writing as a passion.

“I have a true passion for telling stories, it is how I express myself and writing helps me arrange my thoughts,” Lehto said.

Lehto was one of a number of young writers who submitted an essay to the contest, including several from Sisters High School.

As a graduating senior, Lehto was always on the lookout for scholarship opportunities and would generally gravitate towards writing contests. The Waterston Desert Writing Prize was listed as a contest to enter and they saw it as an opportunity to offer a part of their personal life that other contests didn’t accept. The prompt for the student prize was a memoir piece about the high desert. Their relationship with their mother is based off experiences in the desert, so they wrote the piece called “The Badlands.” Lehto’s mother is an artist and would spend most days when she was off work, out in the Central Oregon badlands, painting and sketching. When Lehto was young, they resented the desert environment because they moved from the warm and green valley that was home, and “I had a very flawed view of the desert. But it was my mother’s favorite environment to be in and when I was younger I often didn’t understand why she would choose to go out there on her own and be away from family.”

In the piece Lehto describes beginning to understand that people need emotional support from nature and not just from people, and that the desert was that support for their mother.

“I regret the way I treated my mother when I was younger, but as I began to understand her connection to the Badlands and its created more of a connection between her and I and I am proud of that,” Lehto said.

Their mother has now completed a sketched map of the Badlands and continues to paint and sketch out there.

It was important to Lehto to write this piece because it was on a “tentative” subject from their life and the relationship with their mother.

“I wasn’t sure I wanted to put this piece out there at first because it is so personal and the relationship is flawed and it was a tough time in our life,” Lehto said.

They decided to submit the piece with the support of their mother.

“My mom is supportive of the success and that is what means the most to me right now,” Lehto said.

The Waterston Desert Writing Prize’s mission, as stated by their website, “is to strengthen and support the literary arts and humanities in the high desert region of the Northwest through recognition of literary excellence in nonfiction writing about desert landscapes, through community interaction with the winning authors of the annual prize, and presentations and programs that take place in association with the prize.”

Lehto had a connection to the prompt because they knew it was an opportunity to write about their relationship with their mother, while also still writing about a connection the high desert in which they live.

“I generally gravitate towards writing prompts that I have some sort of personal connection to. I enjoy writing with some sort of structure,” Lehto said.

Lehto’s writing process is simple: “I write the piece in one swoop after organizing my thoughts in my head. Then I come back and edit and rearrange things and that often takes longer than the actual writing process.”

Lehto submitted her work to the Waterston Prize and was the winning recipient of a $250 scholarship.

“I am grateful that people read my piece and it is nice for it to be acknowledged,” Lehto said.

Lehto will be attending the University of Oregon in the fall and plans to keep up with their writing over the summer. They run a book and literature club with their literature professor from RPA as well.

“He let me create the curriculum for this club and I plan on really focusing on becoming an educator,” Lehto said.

The Waterston Desert Writing Prize has postponed the annual award reception event due to COVID-19 but expects the event to be held September 10. More information can be found about all the writing prize winners this year at https://www.waterstondesertwritingprize.org/.